NORWALK, OH – Brittany Force and the Monster Energy / Flav-R-Pac Chevy dragster team will look to continue their domination of the 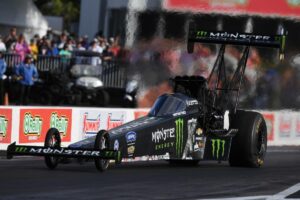 The points leader for a career best five straight events, Brittany Force is arguably on pace to claim her second NHRA Top Fuel championship at the helm of the Monster Energy / Flav-R-Pac dragster prepared by David Grubnic and Mac Savage. With three wins already under her belt this season, the 2017 World Champion will try to give JFR its first Top Fuel win at Norwalk after finishing runner-up to Steve Torrence by .014 of a second in 2021.

“Heading into Norwalk, a quick turnaround from Bristol. Definitely okay with that. This Monster Energy / Flav-R-Pac team plans to pick up some points. We get four qualifying rounds before going into race day, which is awesome,” Force said. “We’re looking for a top three qualifying position and getting as many points as we can then going rounds on race day and getting into that winners circle.”

In last year’s semifinals, she set the current track record of 3.696 seconds, becoming the first and, as yet, only driver to break the 3.70 second barrier at Norwalk and making Summit Motorsports Park one of the 10 tracks on which she is the current ET record holder. Her lone No. 1 start in the Summit Racing Equipment NHRA Nationals came in 2019, from which she advanced to the semifinals.