EPPING, NH – Brittany Force and her Flav-R-Pac dragster team head to New England Dragway cued up for success at the TascaParts.com 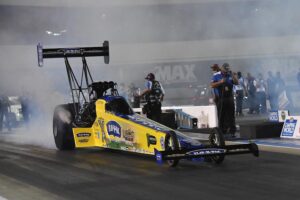 NHRA New England Nationals June 11-13. Sitting fourth in the championship points standings, just 17 outside of the top three, the Flav-R-Pac team is ready to capitalize on their high-level performance.

Led by crew chiefs David Grubnic and Mac Savage, Force and her team have opened the season garnering top speed at the Gatornationals, tallying the 21st and 22nd No. 1s of Force’s career at each of the Four-Wide events, Las Vegas and Charlotte, and setting both ends of the track record at zMAX Dragway. Each of her No. 1s have been shared with Funny Car teammates, Robert Hight in Vegas and her father, John Force, in Charlotte. At the most recent event, the rain plagued NHRA SpringNationals, Force qualified No. 6 after only one qualifying run down the Houston Raceway Park track and then had to wait until Monday morning to race only to run into tire smoke for a first-round exit.

“Six races into our season and our Flav-R-Pac team is still on the hunt for our first win of the season,” Force said. “We head East to Epping this weekend, a track we’ve been successful at with a win in 2017. David Grubnic, Mac Savage and this entire team have made some progress over the last few races and are looking to get the job done on race day.”

Force has one of only three wins for John Force Racing at the New England Nationals, an event that came into existence in 2013, her rookie season. Her sister Courtney Force won the inaugural event in Funny Car in 2013 over her father John Force who went on to win the event in 2015. Brittany tallied her win during her 2017 championship season.