CONCORD, NC – Brittany Force and the Flav-R-Pac / Monster Energy Chevrolet dragster team are only nine points out of the lead heading 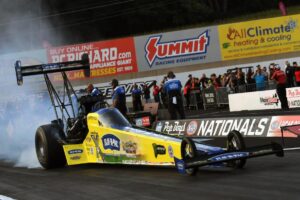 to the Betway NHRA Carolina Nationals at zMAX Dragway, the second of six races in the NHRA Countdown to the Championship.

Already with four wins this season to equal her career best, Force was the first driver other than Steve Torrence to start the Countdown from No. 1 since 2016 and is well positioned to become just the fourth woman in NHRA pro drag racing history to win multiple championships (after Shirley Muldowney, Enders and Angelle Sampey).

“Charlotte is second on the Countdown list and after a challenging weekend our Flav-R-Pac team is ready to get the event started,” Force said. “First priority is to get back on track with solid qualifying. We will be looking for three consistent qualifying runs to get us in the top of the show. Every point matters and we have a shot to pick up some points with good qualifying runs. Race day we need to be going rounds. This Countdown is short and we need to step it up and will be hunting down a win this weekend.