Houston, TX – This weekend Rookie of the Year front runner and winner of the Mopar Express Lane Summernationals Justin Ashley took a 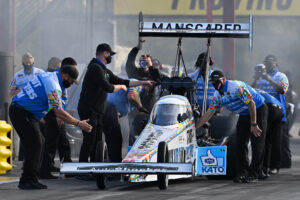 conservative and calculated approach to the race. Last week in Dallas after a career best elapsed time of 3.687 seconds his Strutmasters.com Top Fuel dragster powered by MANSCAPED developed what was best described as a “gremlin.” His next three runs at the Texas Motorplex saw his Aaron Brooks tuned race car damage parts at a rate not seen in the 2020 season. The team knew they needed to evaluate the race car leading up to this weekend’s race.

“We knew we were going to have to have a different mindset for this weekend. We didn’t want to damage any more parts and we wanted to race smart. We have a young team and this is part of the learning curve. We went through the race car the days leading up to Saturday’s qualifying and felt like we had it figured out.”

The team made two planned shut off runs on Saturday but even not pressing to the finish line the Strutmasters.com dragster that flies the decals of Truck Air Ride, Auto Shocker, MANSCAPED, Kato and Guard Lab was able to qualify No. 9 and face 2013 NHRA world champion Shawn Langdon for the sixth time in 2020. In the previous five meetings Ashley had picked up two wins and he was looking to even his record against one of the toughest drivers on the tour.

It was an incredible start with both drivers hitting the tree with stellar reaction times. As the Strutmasters.com dragster flew down the track it shook the tires loose and Ashley masterfully pedaled his 11,000 horsepower dragster keeping it straight and regaining control. Unfortunately his opponent experienced no issues and pulled away for the win.

“This was a learning experience weekend but we gave it a strong run in the first round. I don’t have a lot of experience pedaling this race car and I felt good about how quickly I caught it. That is part becoming a better driver. You have to be prepared every second down the track. I am proud of this team and how well we have performed this weekend and this season.”

A strong performance at The Strip at Las Vegas Motor Speedway could see the rookie driver move up as high as fifth in the Camping World Drag Racing Series. The 25 year-old from Melville, New York is currently seventh but less than two rounds out of the fifth spot.

For the second weekend in a row Ashley was racing at a new track and his overall experience on track and in the pits continued to impress. “Racing back to back in Texas was a lot of fun. The tracks here in Houston and last weekend in Dallas both are high performance tracks and I think we made the most of our weekends. We have a lot to learn and it was a thrill to race in front of so many new fans. Both days we had people coming by and asking about our race car and our sponsors. That is the name of the game as far as fan interaction,” added Ashley.