CONCORD, NC – Antron Brown qualified his Matco Tools Top Fuel dragster ninth at the NHRA Four-Wide Nationals, an event where he has 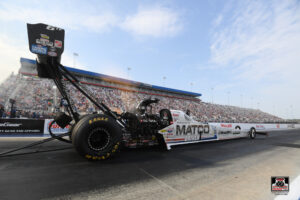 earned two previous wins. The new team owner has visited the final elimination quad at the last three four-wide events (Las Vegas 2022, Charlotte 2021, Las Vegas 2021), and was looking to keep his streak alive on Sunday at zMAX Dragway. Brown drew friend and technical alliance teammate Justin Ashley, Austin Prock, and Cameron Ferre in his first-round quad. He was quick on the throttle but his machine started to lose traction before the 330-marker and he slowed to a 5.263 E.T. while Ashley and Ferre made full pulls to advance to round two.

“That was just a tough first round here at Charlotte for the Four-Wide Nationals,” said Brown a three-time Top Fuel world champion. “Certainly not the result we expected from a really tough quad with Justin Ashley and Austin Prock and Cam Ferre. They’re all tough though. We ran decent in qualifying but would have liked to have started higher than ninth. The car was just a little fast today and we lost traction. We’re disappointed and need to figure it out. We’re only a quarter of the way through this season, so there’s a long way to go. It is a marathon and we have some catching up to do. We’re going to dig deep, work hard, test here at zMax Dragway tomorrow and come out swinging at Richmond (Va.) in two weeks.”