Norwalk, OH – Antron Brown looking to continue his Bristol progress in Norwalk.  “We had a good weekend in Bristol, and we’re definitely 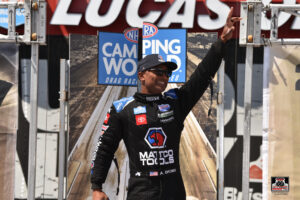 making and strides moving forward. That’s what we’re working hard to do is keep pushing forward, and I like the direction we’re going. I’m looking forward to getting to Norwalk, keeping our head down and getting after it. It’s going to be a hot race, but we know how to navigate those conditions. It’s going to be tricky, but they always have a great track surface in Norwalk. I believe we’ll run well and we’ll see what we can do this weekend.

“This team is pulling hard together. We went some rounds (in Bristol) and the one thing about that is, when you’re going rounds, you’re always improving and the more laps you get, the better you get. We’re headed in the right direction.”

Noteworthy: Norwalk is considered a homecoming race for Brown and the Matco Tools Top Fuel team:Matco’s corporate headquarters are located approximately 75 miles east of the track in Stow, Ohio, and Summit’s headquarters are located in Tallmadge, Ohio
– Crew chief Brian Corradi is a native of the area, and asst. crew chief Mark Oswald originally hails from Cincinnati
– The AB Motorsports team enters the Norwalk race fresh off their best event outing of the year, having raced to a semifinal finish from the – No. 4 qualifying position in Bristol, and are hoping to carry that momentum into the Summit Racing Equipment NHRA Nationals this weekend